“Amidagataki Waterfall” is the reason why Gujo is called a sanctuary place.

This waterfall was discovered by monk Taicho, who opened up Mt Hakusan, after hearing from a goddess. It was once called “Nagataki”.
Since then, this waterfall has attracted many people as an important place in Hakusan Faith as a place for training.

In the 16th century, when Dogahoin from Hakusan Chugu Nagataki Dera Temple prayed for protection in the cave at the back of the waterfall, Amida Nyorai appeared. The name of Amidagataki Waterfall comes from this legend.

Amidagataki Waterfall with a head of about 60m is the best waterfall in Tokai region and has been selected as one of the 100 best waterfalls in Japan and 50 famous waterfalls in Gifu.
Because of its beauty, Katsushika Hokusai, a famous Ukiyo-e artist from Edo era, drew Ukiyo-e of the waterfall.

A monument on the sidewalk of Amidagataki Waterfall on the walking path leading to the waterfall is engraved with the phrase saying, the rainbow and sound of the waterfall, by a poet from Ogaki. After seeing a beautiful rainbow appear from the basin, which can only be seen in the early morning conditions, he created this poem. You can feel the gaze of autumn.

When I finally stood in front of the waterfall, my heart was filled with warmth.
During our busy daily life, we are exhausted without noticing. I can feel relieved releasing all my desire and sin after looking at the waterfall.

Fresh green in spring, deep green in summer, colored leaves in autumn, and snowy mountains in winter.
All four seasons and every moment create different colors. People have been coming to Amidagatake Waterfall for praying and healing since the ancient past. This waterfall is truly a symbol of this sanctuary place.

Belonging to Gujo Tourism Federation, a group of consultants providing all kinds of advice related to outdoor activities. We can let you know about the fun and charm of outdoor activities in Gujo and can guide you to have a more enjoyable trip. Please feel free to contact us!

Enjoy summer at Hirugano! Micro-tourism for parents and kids! 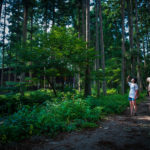 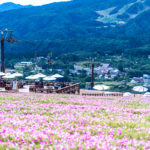 Take a rest and see the largest scale of over 40,000 petunia plants in Japan at Hirugano Picnic Garden. 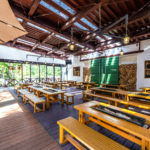 Nagaragawa Cycling Cruise, riding across the town and along Nagaragawa River 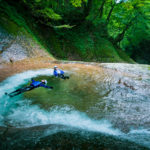