The meeting place for this”Nagaragawa River Headwaters Shower Climbing Tour” is at Kamiho-no-yu, a hot spring facility in Shirotori-cho. We change into swimsuits or wetsuits we brought here, and take a bus for about 15 minutes to the starting point.

The stage this time is Maetanigawa River, which is a clear stream going through the south side of Mt Dainichigatake and Hakusan mountains and continuing to Nagaragawa River. Many trainees were attracted to this sanctuary near Amidagataki Waterfall in ancient times. After hearing the history of the river and mountains, I felt protected by these sanctuary places when I looked back at the mountains. Since this area is privately owned, only tour participants can enter this place. It is a secret realm that is kept unknown to the world.

Our tour guide is Mr Daisuke Wada of EARTH SHIP.
He was born in Gujo and played a lot at the river in his childhood. He has been a show climber for over 20 years. He is a local guide also qualified as a mountaineering guide and knows both mountains and rivers of Gujo. He is kind and friendly and looks very reliable.

After continuing climbing a slippery road for about 10 minutes.
Mr Wada gave us a hand and said, “Be careful! It’s dangerous there.”
When I asked, “Isn’t it scary?”, he said, “I walk every day and it’s like a walking path for me.”

When we find a mysterious creature while walking, he told us “He has stopped moving from that place for many days”, just like introducing a friend to us.

When I walked in the water and sometimes the water level was around my chest, we arrived at a fast-flowing mountain stream. At “EARTH SHIP”, we asked a local old man about this place and started various games to make us enjoy it more. When we climbed the mountain stream, an untouched natural rock appeared. “Please slide down from the top of the mountain stream to this point!”

It is a waterslide by sliding with a sled at this fast-flowing mountain stream.

Wow!!
The flow was much faster than imagined. I slide down swiftly along the rock surface. I felt the flow of water and thrills through the wet suit!.

It only took so short a period of time to finish sliding that I wanted to try one more time!
At first, I was worried that my makeup would come off, but I forgot to care as it was so much fun!

Falling to the waterfall basin from the height of 3m!

After enjoying the waterslide, we climbed even higher.
We climbed the narrow path by walking like a crab to avoid slipping.
When I managed to climb up with excitement, I found a waterfall basin about 3m below my eyes.

When I was told “You can jump from here” and I was astonished again!
I was a bit frightened, and my legs were freezing. But when I heard the countdown from “3, 2, 1”, I started leaning forward.

When I jumped with both arms raised, I was quite scared because my time in the air was unexpectedly long.
However, the moment I reached the water, I felt like I was surrounded by water.
Fear and worries I had before the experience became lighter.
After becoming an adult, I thought that I could only act like a child in front of my friends, but I was surprised that I was reacting naturally through shower climbing.

The most difficult point “Uogaeri-no-taki”

The most difficult point of this tour is “Uogaeri-no-taki”. As it is too steep, there is a rope for you to grab and climb along the waterfall.

Step by step and one by one. We start climbing this almost vertical wall.
Mr Wada said, “Keep your center of gravity against the wall without bending your waist!” After clearing this stage, you can feel so satisfied and made a big smile.

Take a break on the riverbanks.

After climbing up the waterfall, we sat on the rocks by the river and take a short break with a cup of hot tea. Everyone enjoyed chatting together while feeling the water of the river flowing at their feet.

The last show is somersault?!

Time flies when you are having fun.
After taking a break, we started climbing the last slope to reach the goal.
Mr Wada told us to watch him while he ran towards to wall.
He showed us somersaults after running on a wall!
Everyone applauded for his stunning performance. He is a great tour guide entertaining us with a series of surprises from the start until the end. On our way back, we walked along the forest road for about 15 minutes to the shuttle bus.
You can experience this tour only for 4 months from June to September every year. This is one of the best activities in Gujo, recommended to people who are not able to open themselves up to experience.

20 minutes walk from “Outdoor style AMIDA”, you can “Amidagataki Waterfall“, which is one of the 100 best waterfalls in Japan. It is the most famous waterfall in Tokai region with a head of about 60 meters. There is a walking path to the waterfall basin, so you can feel the splash of water comfortably. Along the path from the parking lot, you can find the popular Amidagatakiso Nagashisoumen, which is said to be the birthplace of Nagashi Somen noodles.

A freelance writer born in. Chiba and moved to Gujo in 2019. She writes about lifestyle and introduces local life, works as a coach career counselor at SHE, Inc., and also as staff at Echizenya which is a base of town development.

New plans for non-skiers at a ski resort! What is a “Non-skiing winter activity” in Gujo?

Using both your body and brain! Go to an adventure 20m above the ground! Join us at Washigatake Alps Adventure from France! 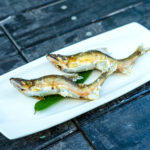 Interview with a salt grilled Ayu master in Gujo!

Enjoy summer at Hirugano! Micro-tourism for parents and kids!

Enjoy outdoor activities in a water town! Why DEKKYS RAFTING is so popular?